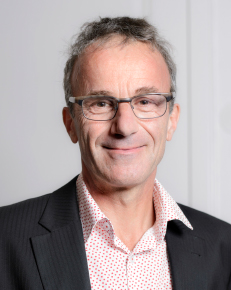 Director of the Department of Ecology and Evolution at the University of Lausanne, Dr Laurent Keller is one of the most renowned researchers in Switzerland in the field of evolutionary biology and is also held in high regard at international level. His research into ants involves ground-breaking experiments that have greatly helped to improve our understanding of natural selection and the social behaviour of animal communities. The findings from this research enable us to draw parallels with human cohabitation, such as how people cope with stress or ageing processes. For example, Professor Keller has shown how robots programmed to behave like ants can be more efficiently used when grouped in a swarm.

His theoretical and in particular his experimental research has provided an important basis for further developments in this field. Professor Laurent Keller is also an excellent mentor: numerous researchers in his team have benefited from his knowledge and have themselves gone on to pursue careers in science. Furthermore, Laurent Keller knows how to make his research accessible to a wider public, as demonstrated by the several popular science books and articles he has published.

Born in 1961 in the canton of Aargau, Laurent Keller studied biology at the University of Lausanne, where he obtained his PhD with distinction in 1989. He has held several research fellowships, including one at the University of Toulouse (France) and another at the University of Harvard (USA). He has also conducted research at the Museum of Zoology in Lausanne. In the early 1990s he received significant support from the Swiss National Science Foundation (SNSF). In 1994 he worked as an outside lecturer and two years later was given a full professorship in evolutionary ecology at the University of Lausanne. In 1998 he became Director of the Department of Ecology and Evolution at the University of Lausanne, a post he continues to hold. He has received numerous awards over the course of his successful career, including the national Latsis Prize in 2000 and in 2010 an Advanced Grant from the European Research Council (ERC). Professor Laurent Keller holds seats in many scientific bodies in Switzerland and abroad; he currently serves as President of the European Society for Evolutionary Biology, a position that he will hold for the period 2015–2017.