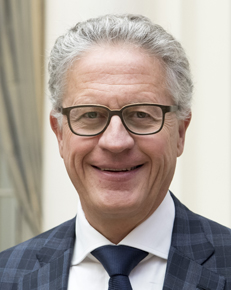 Thomas Stocker, a professor at the University of Bern, has been awarded this year’s Marcel Benoist Swiss Science Prize. By means of climate modelling and ice core anal-ysis, Prof Stocker has been able to demonstrate the reality of climate change and its resulting consequences. In keeping with the objects of the Foundation, his research findings are of great importance to human life, and address one of the main challenges facing today’s society.

Prof Stocker is a key player in climate research on the national and international stage. At the beginning of his research career in the late 1980s, his work focused on theoretical modelling. He later incorporated findings from various climate archives into these models. He discovered that there is a close connection between changes in ocean currents and climate. His team and his colleagues have conducted ice core drilling expeditions to Greenland and the Antarc-tic, and have been able to determine the greenhouse gas concentrations over the last 800,000 years.

Prof Stocker’s reseach makes a significant contribution to a better understanding of the cli-mate system and emerging climate change. In his field, he is one of the most widely cited scientists in Switzerland, and he is the author and co-author of more than 200 scientific arti-cles. He has already received several awards for his work.

Prof Stocker understands the importance of explaining the issues in his field of study and his findings not only to the scientific community, but also to policy makers and to the general pub-lic in a clear and comprehensible way. He is highly respected for his scientific findings, and is also a successful lecturer and mentor. He has passed on his knowledge to a large number of students and researchers over the decades. Some of them now hold professorships in Swit-zerland or abroad.

Mr Stocker is a Swiss citizen born in 1959. He obtained his PhD from the ETH Zurich in 1987, and then did research in London, Montreal and New York. Since 1993, he has been the head of the Climate and Environmental Physics Division of the Physics Institute of the University of Bern. From 2008 to 2015, he was Co-Chair of Working Group I of the United Nations Inter-governmental Panel on Climate Change (IPCC). The report drafted under his chairmanship, which was adopted by all countries in September 2013, formed the scientific basis for the Paris Climate Agreement.